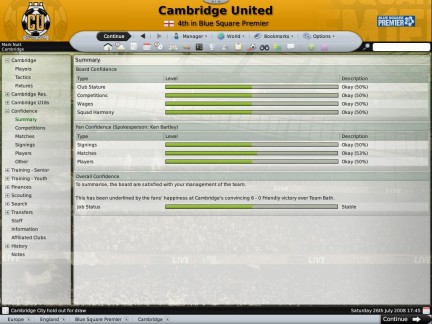 General
=======
– Phil Jagielka is no longer described as a GK on the player profile screen (when player pictures are disabled).
– Goalkeepers no longer included when working out the worst passing statistics for the team information screen.
– More variation in number of games played by players playing for clubs in inactive nations.
– Adjusted Scottish cup attendances.
– Fixed “Mistakes led to 1 goals” feedback string in motivation information.
– User can no longer reject a transfer offer via the Transfer Centre if his club is bankrupt.
– News about reserve team bans being extended now sent to first team manager.
– Assistant manager match analysis now shows if a user takes control of a team who didn’t have an Asst Man, and then employs one.
– Human managers with Belgian nationality now have both Dutch and French as their languages.
– Fixed contract issues with newgens in certain nations like Scotland where they weren’t given a proper contract.
– Prevented assistant manager from saying a player had played a poor game riddled with mistakes if he had a good rating still.
– Stopped non-managerial staff members being marked in landmarks as “Manager

Interface
=========
– Fixed bug where players who moved on a free after a loan spell (pre-game histories) did not have the fee shown on the player career history screen.
– Fixed issue where club badges were sometimes not coming up on network clients.
– Re-enabled to “Overall” summary line in the Finances-Salary screen that was not being displayed.
– Live league table for Croation First Division now shows correct table when the league enters the 3rd round of matches.
– Fixed duplicate skin entries on the Preferences screen.
– Fixed Hall Of Fame record stats not appearing on manager’s history panel.
– Made the sub-header graphics different to the header graphics.
– Fixed bug where person achievements would sometimes not appear when clicking on a club row.
– Fixed team/player profile box not appearing on administration news item.
– Manager Information screen now always shows correct league and cup wins for the current club.
– Match widgets are now slighty transparent.
– Match widgets can be minimised.
– Fixed classic View camera selection changing when browsing off screen and going back when viewing a saved match.
– Added ability to set view to TV or Classic in pre-match screens.
– Fixed “Play” text at half-time when a tactical chenge is made, then cancelled.
– Fixed incorrect string in error dialog when attempting to save a tactics file with a duplicate name.
– Yellow card match notifications should no longer get “stuck” on screen.
– Fixed tooltip for ‘Tactics’ when a match is running within TV View.
– Fixed some layout on the assistant manager feedback floating widget.
– Fixed tactics button not appearing sometimes in ‘TV View’ during a match.

Board Confidence
================
– Fixed fans being “disappointed that a player has played so few games for the club” when they have been ineligible to play any matches.

International Management
========================
– Stopped user being able to take sole control of U23 team when adding new user.
– Fixed occasional international bio string mentioning a young player ‘trying to make the step up’ when he is yet to establish himself at youth level.
– Fixed headline “

Press Conferences
=================
– Fixed player occasionally referring to male manager as “her” in player reaction.
– Fixed user being asked about defending their title crown when not the top division.
– Fixed press conference refering to a dismissal influencing ‘a game you were leading but went on to lose’ when team was drawing at the time.
– Fixed issue where media thought tie was two-legged if the match was moved and played at a later date than usual.
– Fixed question about players being at loggerheads still being asked over a year after original occurance.

Board Takeovers
===============
– Slightly decreased likelihood of getting a tycoon takeover.
– Ensure manager gets a clean slate for board requests when a new chairman takes over.

Transfers
=========
– Allowed players with a future transfer arranged to be given a squad number.
– Stopped you being allowed to transfer or loan list players who also have a non-playing job at your club.
– Helped increase number of south American transfers into Spain.
– Helped ensure clubs replace sold GK’s in a quicker manner so they aren’t short when transfer closes.
– Stopped bidding clubs repeatedly offering long term loan offer for same player.
– Ensured scouts at lower division clubs start looking at lower standard players quicker when assigned.
– Stopped humans being able to sell poor players for silly fees.
– Changed feedback for rejected loan items news item to not state silly loan fees and instead state player not available for loan.
– Stopped Ability to sign transfer listed (Not listed for loan) players on loan with no wage contribution.
– Allowed squad rotation squad status below the premiership.
– Another fix to help prevent inflated transfer fees for some players.
– Put some changes in to help increase the number of co-ownshership deals in italian football.
– Made changes to help increase number of recently released youth players find new clubs.
– Stopped some clubs rejecting loan offers and quoting lack of wage percentage as reason, when in fact they just don’t want to loan the player to that club.

Network Game
============
– Fixed bug in network games when user is always forced to new screen if he has been forced to continue.

Low Detail Match Engine
============
– Fixed bug whch would sometimes cause a substitution to be made very early in the match for no reason.

Europe
——
– European Cup group winners now always play 1st leg of next round away.
– Fixed some qualification problems where sometimes a team in 2nd place would qualify for the Champions League group stage directly instead of the team in 1st place.
– Moved Euro Cup squad selection date for group stage a week later (from the 2009/10 season).
– British referees will not referee games involcing british teams.

Austria
——-
– Fixed bug were new signings in Austria were not being registered for matches properly.

Belgium
——-
– Fixed bug where Belgian First Division winner in first year doesn’t get any news items about being champions.

Brazil
——
– Youth contract players not allowed to play in competitive matches.
– Fixed bug in some state competitions where if a team wins both opening and closing stages, no landmark would be added.
– Updated Sao Paulo State Championship TV rights and prize money.
– Trial days are now held after the first season.

Czech Republic
————–
– Fixed a problem with the Czech Cup cup draw around 12th July where the game would take a long time to make the draw.

Germany
——-
– Teams in UEFA Cup don’t always have their league games moved to Sunday for TV if they are not playing on the Thursday before.
– Fixed not all First Division teams playing last round of league matches on last day of season due to a German team reaching Champions Cup final.

Poland
——
– Fixed Polish FA Cup round 1 and 2 draw.
– Fixed correct team not being entered into the Champions League.

Portugal
——–
– Adjusted prize money for the Portugese Cup.
– Teams start the second stage of the Portugese Second Division on half the points they managed in the first stage.

United States
————-
– Stopped American and Mexican teams playing each other in the NACL.
– MLS teams now dont qualify for Copa Sudamericana.
– Senior Development players at the start of the game now are paid the correct wage.
– Stopped players at human managed clubs been waivered without them asking them to be.
– Fixed not be able to give players squad numbers after using auto pick.
– Staff members no longer can be offered Developmental, Senior Developmental or Senior contracts.
– The second Designated Player only counts 65,000 towards the cap instead of 15,000.
– Removed the minimum release clauses for players playing in the USL 1 and USl 2.
– The Super, Supplemental and Waiver drafts are always held.
– Stopped user been able to offer non Designated player contract with Designated player wages, and offering a Designated player contract with non Designated player wages.
– Improved AI teams waivering players due to give Senior contracts to players on Generation Adidas, Senior Dev or Dev contracts forcing them over the squad limits.
– When running the USA league in view only mode the Designated and International players are not released and available on a free transfer e.g. David Beckham.
– Squad bonus news item now reports the teams correct finishing position.
– Fixed Players in the drafts can sometimes not be picked.
– Teams no longer passing in the first couple of rounds of the draft.
– Player Rights no longer are retained when a player is waived unless they were drafted in the current seasons draft.
– Player Rights no longer are retained when a player is sold to a non-MLS team for money.
– Top four teams in the overall standings qualify for the Superliga.
– Stopped players squad numbers been removed from teams after every MLS match.