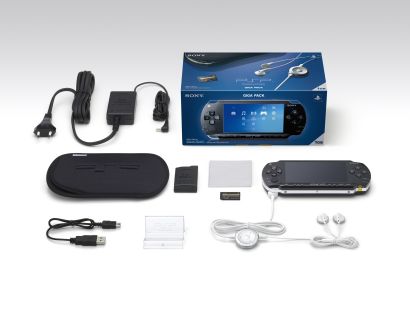 With a 1GB Memory Stick PRO Duo included, the PSP Giga Pack provides exceptional storage opportunities for a combination of movies, music, and photographs, allowing PSP owners to enjoy a full range of entertainment options wherever they may be. The PSP Giga Pack also contains an added value package of accessories, including the PSP System, a 1GB Memory Stick PRO Duo, battery pack, AC Adaptor, USB cable and an all-new PSP stand for easy hands-free viewing.

Introduced especially for the Christmas gift season, and available for a limited time only, the Giga Pack offers exceptional value for money, at a price far lower than if consumers bought the PSP Value Pack and 1GB Memory stick separately. With an RRP of just £214.99, €299.99 and AUD499.95, the PSP Giga Pack will be available in the UK and Ireland on 21st November and throughout Europe, the Middle East, Africa and Australasia on 28th November 2005.

With more than 30 times the capacity of the Memory Stick supplied in the Value Pack, the Giga Pack’s 1GB High Speed Memory Stick PRO Duo frees the entertainment potential of PSP, allowing users to store and play over 30 hours of their favourite music tracks, store and view over 500 high resolution digital photos or play two full Hollywood movies back to back .

The PSP branded 1GB Memory Stick PRO Duo will also be sold separately at retail from the beginning of November for consumers who have already purchased a PSP Value Pack and wish to upgrade their entertainment storage capacity.

Since its European launch on 1st September 2005, PSP has become a hugely successful cultural phenomenon, selling over a million units throughout the PAL territories in just under a month. With an extensive line-up of over 40 games and over 100 movies on UMD™ from major Hollywood studios, as well as unique game, music and video content available to download from the internet at https://www.yourpsp.com , PSP has taken the entertainment world by storm.

With many more movies and games scheduled for release for the Christmas period, including the much acclaimed Pursuit Force from SCEE and GTA: Liberty City Stories from Take Two, the PSP Giga Pack offers consumers the perfect choice for all their Christmas entertainment needs.