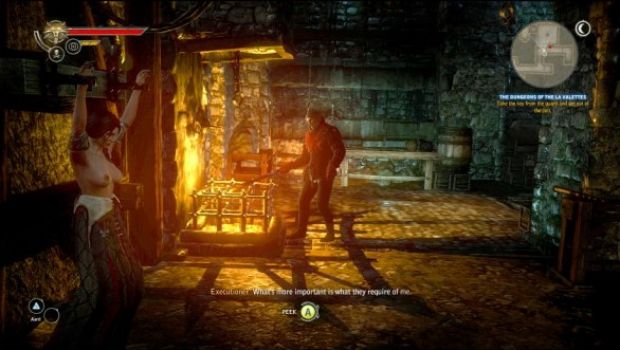 Arena – a new gameplay mode that is separate from the main adventure and narrative of The Witcher 2. In this mode, Geralt of Rivia duels a variety of foes to the death in a gladiatorial arena located in an unnamed town somewhere in the Northern Kingdoms. In addition to winning gold and valuable items, players also receive points for their wins. They can then post their point totals on-line to compare their achievements against those of other blood sport enthusiasts around the world. Geralt can encounter both foes and allies in the arena. He can recruit the latter for a fee to assist him during his most challenging clashes.

Tutorial – the game tutorial takes the form of a brief adventure during which players learn how to use a range of game mechanics and functionalities. Assuming the role of game protagonist Geralt of Rivia, players save a wounded knight named Bolton of Ironford while learning game controls as well as the basics of combat and alchemy. This transpires step by step as the tutorial guides players through a series of minor missions. Upon completion, based on demonstrated abilities, the tutorial recommends the difficulty level which the player should choose in embarking on the main adventure of The Witcher.

Dark Mode – The ‘Dark’ difficulty setting is the most demanding difficulty level in gameplay terms. Under this setting, each and every foe represents a significant challenge. In addition to raising the difficulty bar, the module includes several new sets of equipment/items that are linked through a dark legend detailed in the Journal. Once all their components have been collected and donned, the Blasphemer’s, Oathbreaker’s and Kinslayer’s outfits provide great advantages in combat. The swords included in the outfits strip opponents of Vitality while supplementing the witcher’s. However, given that they are cursed, the swords provide no benefit and harm Geralt by sapping him of Vitality as long as the outfits to which they belong remain incomplete.

Meanwhile you can have a look at the full list of changes from the upcoming update:
Corrections and improvements to combat:

• Numerous improvements have been made in the targeting system.
• Parrying is now unlimited (even when Vigor is completely depleted), though parries no longer cancel all damage (maximum 50% reduction once the relevant ability has been acquired).
• Responsiveness of game controls has been improved. This includes but is not limited to casting Signs, parrying, and attacking immediately after evading an opponent’s assault.
• Geralt’s attacks are no longer interrupted by attacking opponents. Attacks are now contiguous and foes cannot interrupt Geralt’s attacks by landing a blow.
• Assorted fixes now prevent opponents from incessantly attacking Geralt after he has been knocked down. Geralt can no longer be knocked down repeatedly in quick succession. Also, he rises quickly while evading subsequent attacks.
• Geralt no longer attacks opponents located behind other opponents positioned nearer to him.
• The target locking system has been improved. Preference is now given to previously highlighted targets.
• Target selection has been improved. Priority is now given to foes affected by a critical effect facilitating the completion of a finishing move.
• The additional two steps Geralt took after mounting an attack with the W, S, A or D key depressed have been eliminated.
• Attacks can now be continued even when a key controlling Geralt’s movement (e.g. W, S, A, D) is depressed.
• Attacks can now be continued if the attack key is depressed immediately after the final strike of an attack animation sequence.
• Geralt can now pivot 180 degrees immediately after completing an attack.
• Assorted problems with key responsiveness have been resolved. Keys no longer need to be depressed twice or more to trigger a given action.
• A distance attack problem has been resolved. Geralt now mounts distance attacks (lunge with sword in hand in the Fast style) when opponents were located at a suitable distance from him.

Other corrections and amendments:

• Casting several bombs no longer blocks further inputs.
• An option has been added to the configuration tool enabling aspect ratio to be set independently of resolution.
• The amount of disk space required for game patching has been reduced.
• The loading of selected Witcher 1 game saves no longer causes the game to crash.
• A greater number of monsters now appear in the cave leading to Loc Muinne.
• Improvements have been made in the manner in which monsters are spawned in the mist in Chapter 2.
• The visual effect accompanying Adrenaline use no longer disappears prematurely.
• Archers now draw their swords more quickly when Geralt approaches.
• Mages no longer automatically cast shield spells when Geralt casts daggers at them.
• The game is now paused when Geralt executes a finishing move in combat.
• The troll in Chapter 2 has been corrected. Previously, in some circumstances he could not be attacked.
• Physics on cast daggers have been improved.
• The site for aiming daggers is now more visible.
• Geralt’s animation when he dies while casting the Axii Sign has been corrected.
• An exploit in the fight against Letho has been eliminated. Previously, this foe could be killed by casting bombs in quick succession.
• An exploit related to the ‘Insane’ difficulty setting has been eliminated. Previously, game saves could be loaded with difficulty set to this level, which was contrary to design intentions.
• Camera positioning/operation has been corrected during the boss fight against the kayran.
• Camera control via gamepads has been improved.
• Assorted adjustments have been made in mutagen statistics.
• The ‘Junk’ filter in the Inventory has been adjusted to provide for correct item filtering.
• In the Inventory, the dialogue window warning of prohibited actions has been corrected.
• Assorted corrections have been introduced to the mini-map in Chapter 1.
• Audio balance throughout the game has been adjusted.
• Erratic character teleportation in mini–games has been eliminated.
• Assorted adjustments have been made in animations applying to nekkers.
• A minor bug in the “Scent of Incense” quest has been resolved.
• Numerous minor fixes have been introduced in character lip-sync throughout the game.

All of the fixes from previous patches are included in the version 2.0, along with all the DLCs released before.